Disculpa, pero esta entrada está disponible sólo en inglés estadounidense y italiano. For the sake of viewer convenience, the content is shown below in this site default language. You may click one of the links to switch the site language to another available language.

According to the Global NGO Technology Report, that interviewed more than 5,000 NGOs from all over the world, cryptocurrency donations represent 2% of the payment methods in the United States and Canada (last year 1%), while they reach 5% in Africa, 4% in Asia, 2% in Australia and Europe, 1% in Latin America.

The growth of cryptocurrency donations, which includes both Bitcoin and Altcoins, is noteworthy: in the report released in 2018 this payment method covered 1-4% of donations, while this year it grows in all continents, up to a 100% increase compared to the previous value in the United States, Europe and Australia. While remaining the least used tool (behind digital wallets, Paypal, credit and debit cards), cryptocurrencies are quickly gaining ground and it is possible that in the next few years the target market can reach, or even surpass, web payment giants like Paypal.

After important initiatives such as Pineapple Fund, which donated 5,000 BTCs (at the time of the announcement, they amounted to about $ 86 million), the positive trend is also shown by Fidelity Charitable, which recently said it had received over $100 million for charity since 2015.

Analyzing the report further, we noticed that about 50-60% of NGOs worldwide accept online donations through their site, while in the United States 85% of organizations use online tools. Similarly, 58% of American NGOs participated in Giving Tuesday 2018 (and 79% of these have already planned to participate in the 2019 edition), while in Europe only 25% participated last year and less than half of these are working on the upcoming new edition.

This shows how fundraising methods are still widely different in Europe and the United States, even if Europeans have closed the gap about the use of social networks as a daily communication tool with their donors (95% vs 97%).

Another metric that in particular interests us is the comparison relative to the understanding of emerging technologies: artificial intelligence is very well understood by about 30% of the interviewees, the Internet of Things (IoT) is clear for 20-40% of the NGOs, while the blockchain technology turns out to be the most difficult innovation to be understood, with only 8-17% of the interviewees that understands well its functioning. 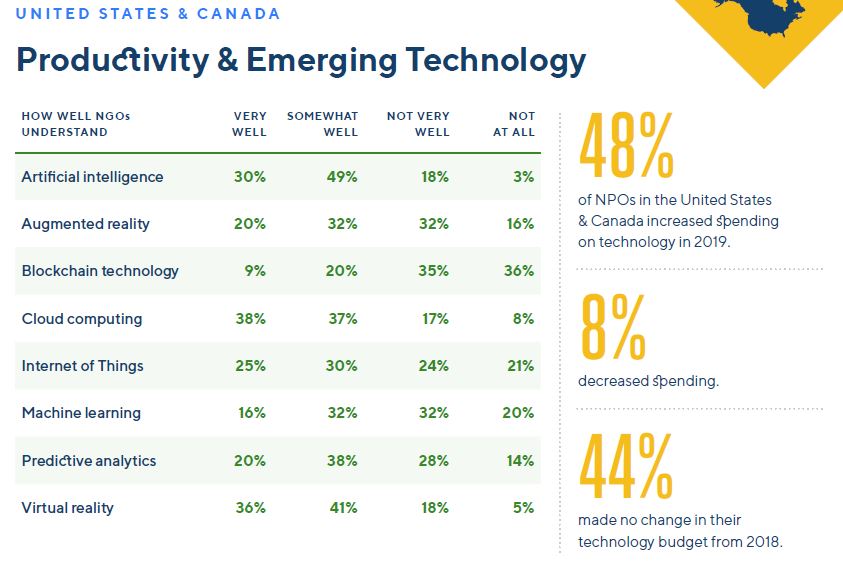 Much work needs to be done to reach a good market penetration and companies like Helperbit act as promoters in favoring the encounter between cryptocurrencies and the non-profit sector.