Yesterday the third conference about cryptocurrency and blockchain has been hosted in Montecitorio’s Aldo Moro room at the Chamber of Deputies, lower house of Italian parliament.

The conference has been organized by Member of Parliament Marco Baldassarre, already involved in crypto environment, and follows the two previous meetings where the Italian crypto associations (Assobit, Blockchain Education Network Italia, Bitcoin Foundation Puglia) and other startups operating in the bitcoin world showed their work.

In the first session the speaker was Stefano Capaccioli, President at Assobit and co-founder at Coinlex, who highlighted the legal and regulatory aspects of ICOs, Initial Coin Offering, new forms of crowdfunding made through the issuing of tokens or coins.
This disruptive phenomenon led to € 1.13 billion raised through ICO investments only in the first 6 months of this year, compared with € 235 million raised through Venture Capital. Since the nature of this tool has not yet been defined, the legislative approaches of the states are different. Capaccioli therefore described the position of the US SEC, Singapore monetary authority, Canadian and Chinese authorities and the issues still unsolved.
The second speaker, Andrea Medri, told his experience as entrepreneur in the crypto sector. Medri is the CFO at The Rock Trading, the longest ever bitcoin exchange, active since 2011.

In the second session the speakers were Claudio Parrinello, Federico Tenga and Guido Baroncini Turricchia.
The first one is working with 4 other entrepreneurs, who have already had startup experiences, for the launch of UNICO, a project that aims to recreate the digital scarcity of collectibles. The startup is starting an ICO on the Slovenian platform cofound.it.
Federico Tenga, COO at Chainside, described the story of their startup and the services offered (taxi payable in bitcoin), focusing more on why they chose to not do an ICO. According to Tenga, there are problems that often are underestimated by those who develop these initiatives, in particular the maturity of the blockchain infrastructures on which the project is based does not offer the adequate guarantees and, considering the business aspect, many projects force the issue of new tokens even if it is not necessary. However, this tool is considered interesting and powerful.
In the end, Guido Baroncini Turricchia presented Helperbit, the startup that uses the bitcoin blockchain to bring transparency in the charity field. The platform allows to monitor the flow of economic flows and is a tool developed to face opacity and inefficiency, in order to rebuilt trust in donors.
The CEO at Helperbit illustrated the charity fundraising managed by Legambiente, that raised over € 30,000 in bitcoin. These funds were addressed to young entrepreneurs affected by the earthquake in Central Italy and thanks to the blockchain it is possible to analyze how the money was spent. Turricchia also focused the attention on the issues linked with the launch of an ICO, highlighting the security aspects, the money and time needed, the market and the token model.

This conference is an important openness that Italian politics gives to entrepreneurs that work with innovative technologies, even at international level. Hopefully the dissemination path in the Parliament will continue with this perseverance and regulators will acquire the knowledge necessary to deal with future decisions with the right awareness. 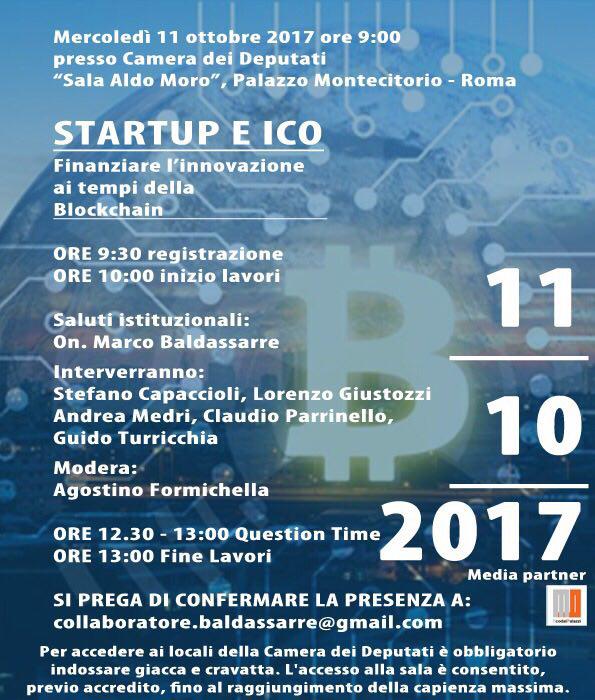